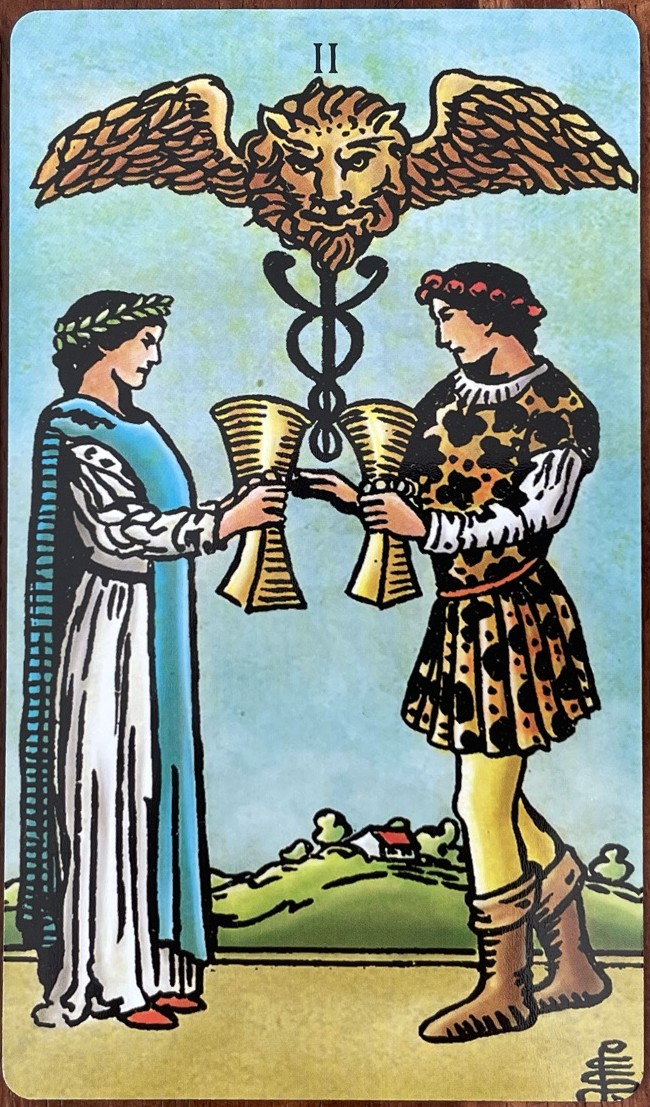 Hey, we're finally free of the horrors of Gemini and the VIII, IX and X of Swords! Phew. Bring on the relatively reasonable sign of Cancer and the suit of cups I say.

The II of Cups seems like a relatively straight-forward card symbolizing productive and harmonious union in all it's forms. That is, of course, until one's eye wanders to the top of the card which features a lion's head over a giant caduceus. Deliciously enigmatic, no?

I'm not going to spend time on the mundane aspects of this card, which I think are pretty obvious. Instead, lets focus on the lion and caduceus shall we? Because there's a lot going on here.

There seems to be fairly unanimous agreement that the red lion over the caduceus is an alchemical reference. This was discussed on the excellent Fortune's Wheelhouse podcast as well as on my friend Reverend Erik's blog post of the II of Cups. However, carrying on with the biblical themes coming out of The Lovers as expulsion from paradise (see Gemini I, II, & III, I'd like to take a specific look at the lion's head in a biblical context.

But first, let's see what Waite himself had to say.

"A youth and maiden are pledging one another, and above their cups rises the Caduceus of Hermes, between the great wings of which there appears a lion's head. It is a variant of a sign which is found in a few old examples of this card. Some curious emblematical meanings are attached to it, but they do not concern us in this place. Divinatory Meanings: Love, passion, friendship, affinity, union, concord, sympathy, the interrelation of the sexes, and--as a suggestion apart from all offices of divination—that desire which is not in Nature, but by which Nature is sanctified." -The Pictorial Key to the Tarot

I have no idea what Waite could possibly mean by "found in a few old examples of this card", because I've looked around and found jack shit. We know for sure that Waite and Smith had access to the Sola Busca tarot and that they drew inspiration from it in some form, however, there's nothing like a lion head with a caduceus on the II of Cups in the Sola Busca. Just a happy little cherub playing a tiny violin. 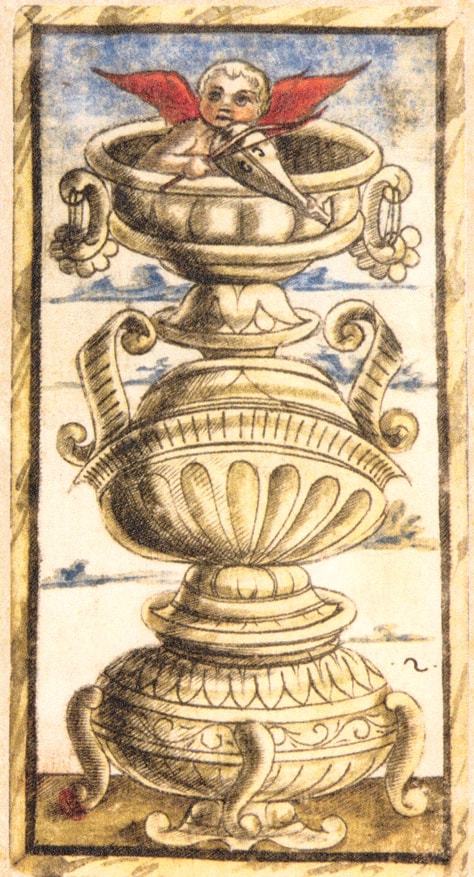 Likewise, nothing like it in the Marseille that I could find. As far as I can tell, our enigmatic duo totally made this up. If "some curious emblematical meanings are attached to it, but they don't concern us in this place" then WHY PUT IT ON THE CARD, ED??

Waite says the lion head appears between the wings of the caduceus, indicating that the head is separate from the caduceus itself, however, there's no shading or anything behind the lion's head to indicate that separation in Smith's art. This is what got me thinking that it might be a reference to the biblical "living creatures" who hold up the throne of God and have four faces, wings in weird places, and eyes everywhere. If nightmarish monsters guarding the throne of God are your thing, then I invite you to read Revelations 4.

Anyway, while there are a ton of associations for the faces of the living creatures in Christianity, one of the big ones is the association with the Four Evangelists: Matthew (man), Mark (lion), Luke (ox), and John (eagle). The faces of the living creatures also appear on the Wheel of Fortune and The World. In particular, the figures in the corners of the Wheel of Fortune are almost certainly in reference to the evangelists, as they are all writing in their books (like good evangelists do). Also, the lion representing Mark is a winged lion, not just any lion. Which really makes me think this has to be related. 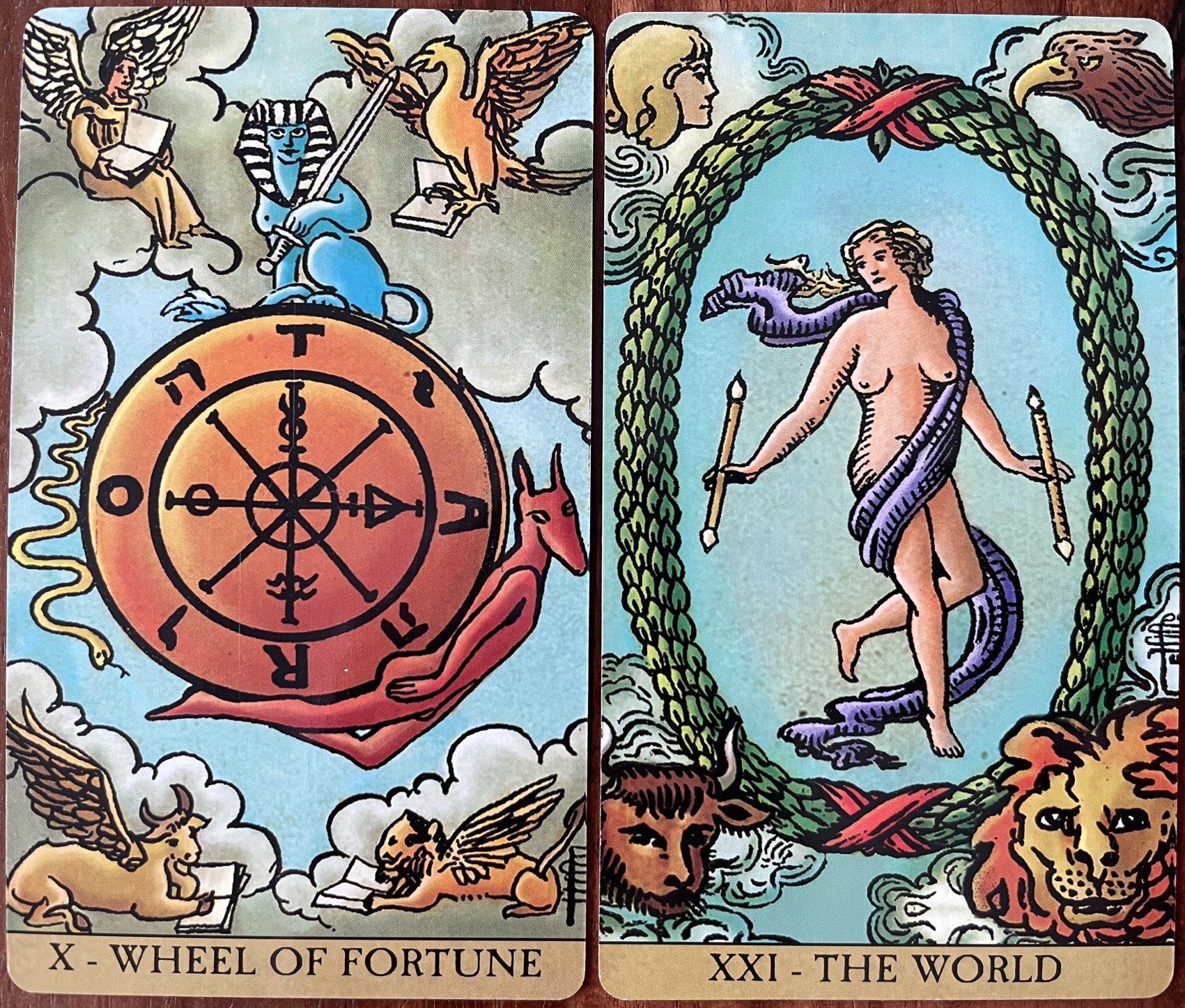 There are two other cards in the RWS which feature a woman prominently on the left and a man prominently on the right: The Lovers (as we saw back in the Gemini sequence), and The Devil. All of these cards have a winged creatures between the two humans. In the two major cards the winged figure is large and mythical (like ya do), but in the II of Cups the winged figure is a bit more subdued. Also note that the humans are larger and more prominent in the II of Cups than in the majors. As the major arcana generally deals with big themes and archetypes while the minors generally deal with the affairs of mortals, this makes sense. I just think the similarity in the layout between these three cards is really interesting. 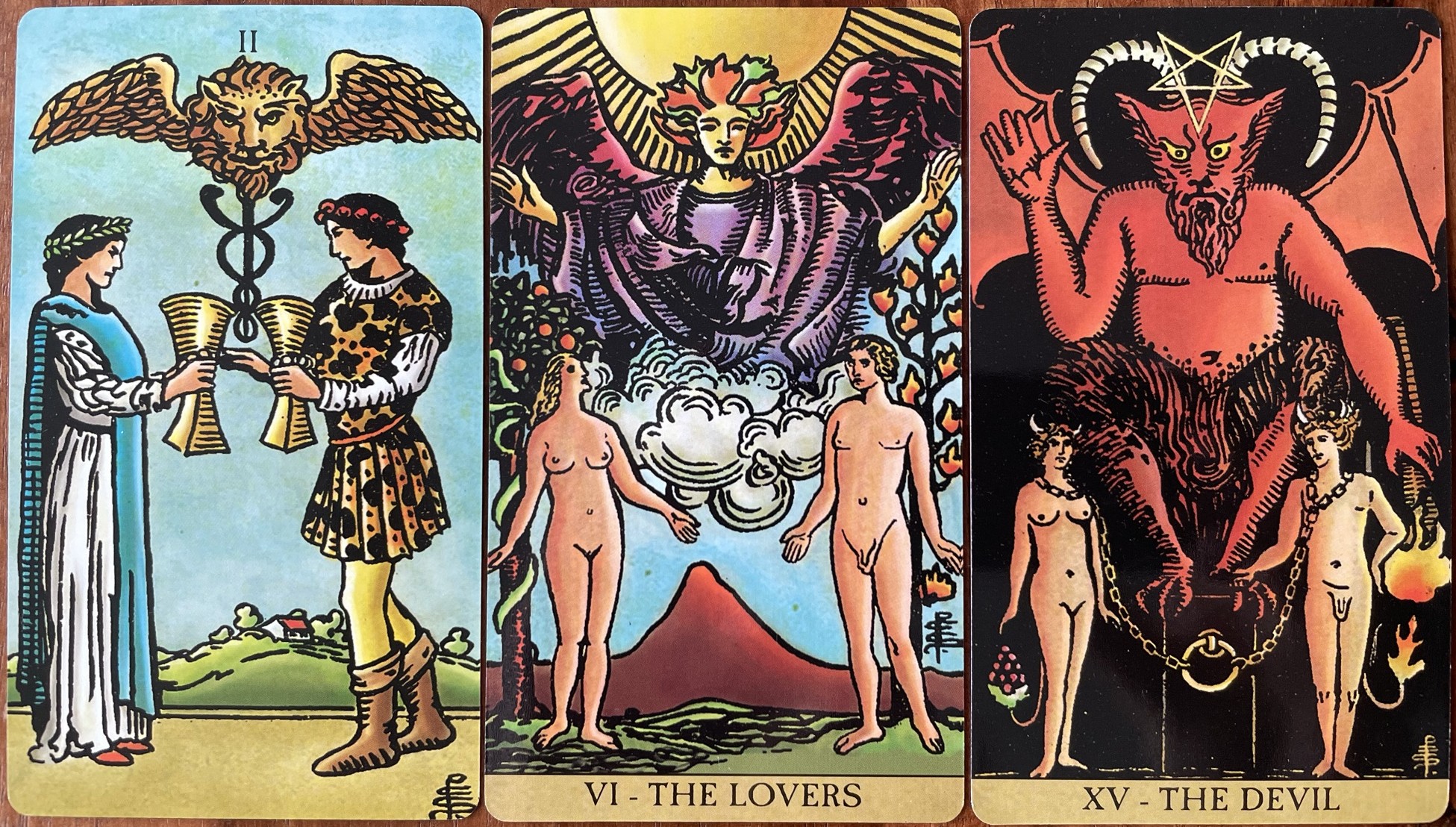 So what does this all mean? If the winged lion on the II of Cups is a reference to the lion face of the living creatures (and to Mark the Evangelist) then what does that have to do with the themes of the card, or the caduceus? I have no fucking clue. One interesting fact about Mark the Evangelist is that he's very likely NOT the author of the Gospel of Mark. Most biblical scholars now believe that the Gospel of Mark was written by an anonymous author who was not witness to the events described in the four gospels. I highly doubt there's any intentional nod there from either Waite or Smith, but there's something about "playing the part" that's interesting in this card. It's one of the RWS cards that takes place on a stage which means there's something a bit staged about the whole scene. Everyone is playing their part.

All that said, this decan is fab and I love it. Venus in Cancer... chef's kiss. A very welcome break from Gemini I-III. 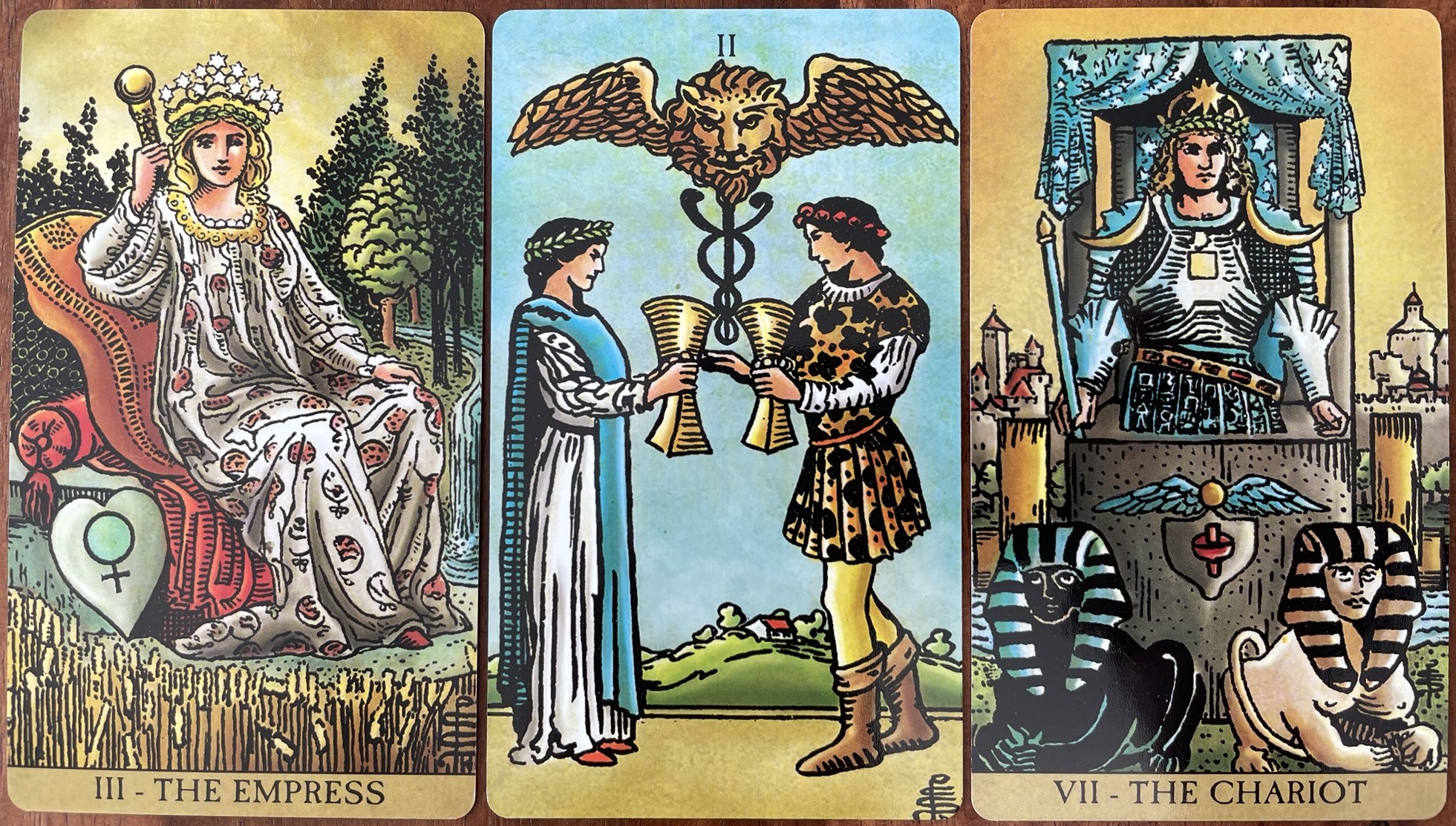