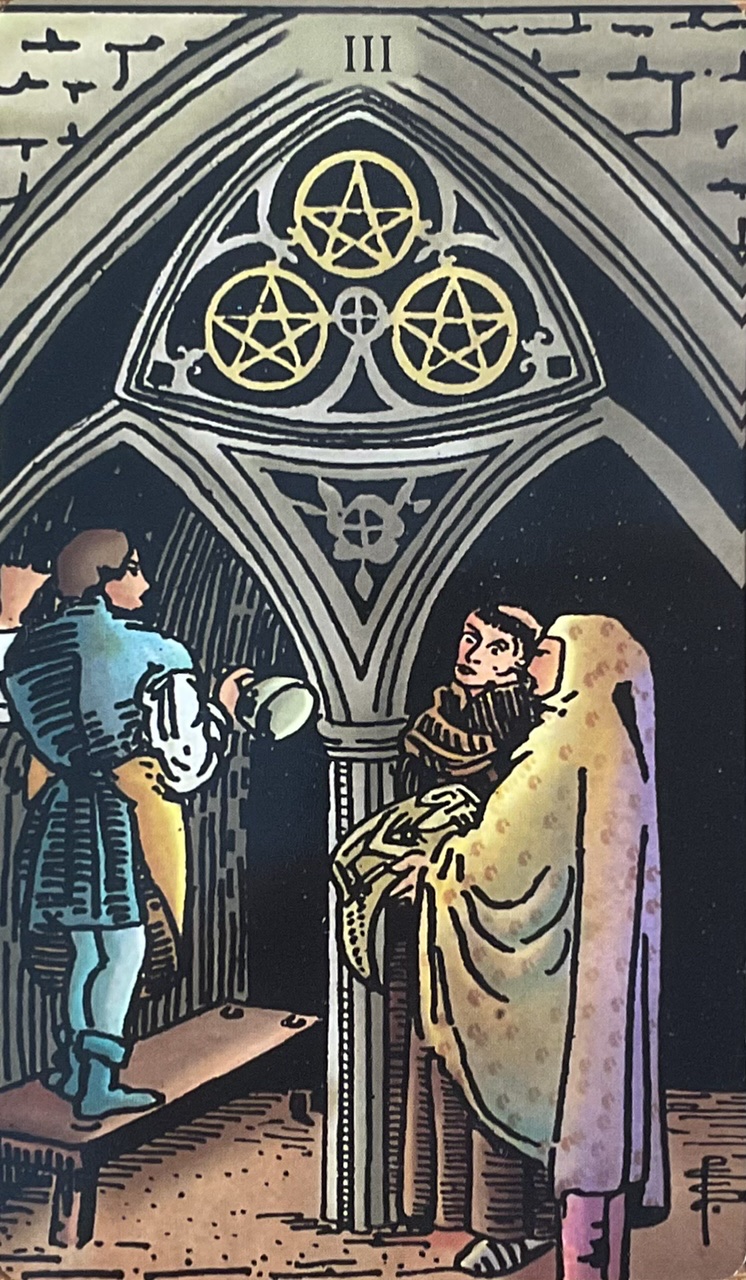 A bit of a meta-observation with this whole decanic tarot journey thing: you sometimes learn more about a card when the associated majors are in stark contrast than you do when they are symbolically aligned. In this case we have the III of Pentacles bookended by the Tower and the Devil. Which might, on the surface, look like utter nonsense. 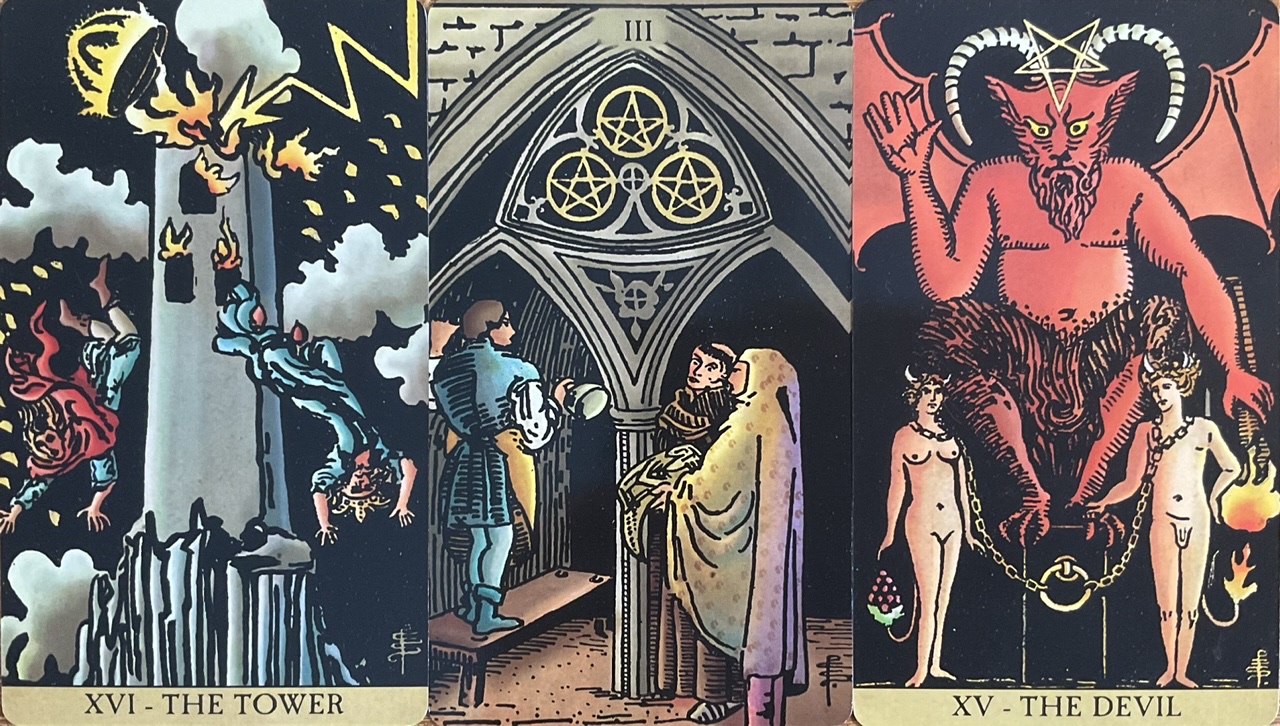 The exercise of trying to reconcile these associations is itself a process that leads to greater understanding. Contrasts are useful when it comes to delineation. Here are a few of my thoughts on this set of cards in the second decan of Capricorn.

First off, I want to talk about the Tower (Mars rules Capricorn II). Everyone that knows tarot knows the major themes of the Tower: rapid violent change, the collapse of power structures, downfall, and destruction. In interpreting the image of the Tower we look more at the action (lightening strike, people falling) than we do at the tower itself. But what is this tower? What is its purpose? Who built it and why?

When I was contemplating the Tower's relationship to the III of Pentacles I got to thinking about the Tower card from Lenormand which has a different mix of meanings more focused on the structure itself: large institutions, aristocracy, universities/education, and isolation. There's no action in the card, just the tower itself. The symbol of a tower is semiotically pretty interesting. Maybe the figure on the left of the III of Pentacles is working on the tower itself. Maybe they've been contracted to work on it by the derpy monk and the awkwardly robed person. Certainly they are all working together to build some kind of structure that they likely hope will not end in disaster.

Also interesting in the III or Pentacles is that neither "derpy monk" nor "awkward robe" appear to be the boss. They are sort of reviewing the plan and then presenting that plan to the craftsman. Or maybe evaluating the craftsman's current work in relation to the plan. In a modern context this could be a software engineer on one side of a kanban board, with a PM and dev lead on the other, during morning stand-up. Which brings us to the Devil: there's no better representation of working in modern corporations. Waite says the figure on the left is a sculptor at work in a monastery. But is the faith of the sculptor aligned with that of the monastery? The III of Pentacles is about work and craftsmanship sure, but it's also about working together as part of a team to build something which none of the individuals involved could accomplish on their own. Presumably for payment. It's unlikely that the "sculptor" will benefit from the structure he is helping to create. Kind of like an engineer at Facebook. 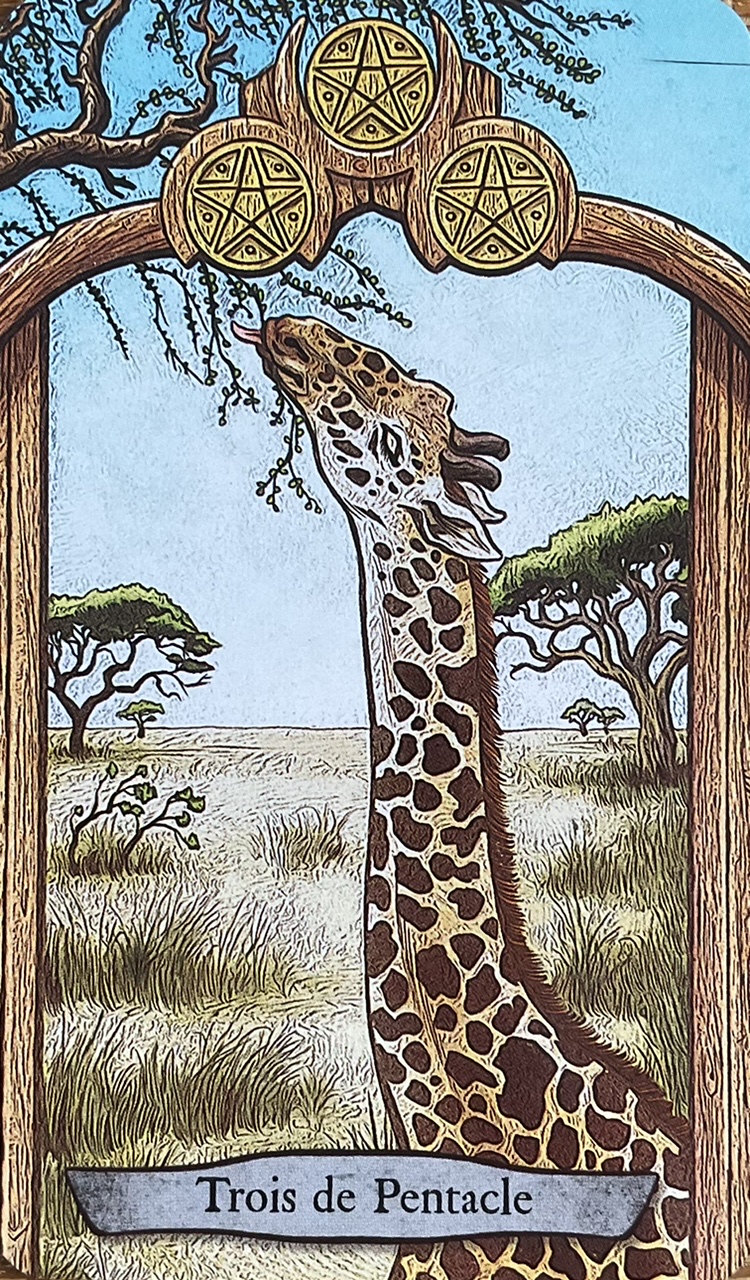 The AT III of Pentacles is a bit of a miss for me. There's probably something really fucking corny in the book about "sticking your neck out" or some garbage, but it really doesn't make sense. A much better fit here would have been termites building massive structures, or even bees building a hive (and then use something else for the also silly VI of Wands). 🤷‍♂️