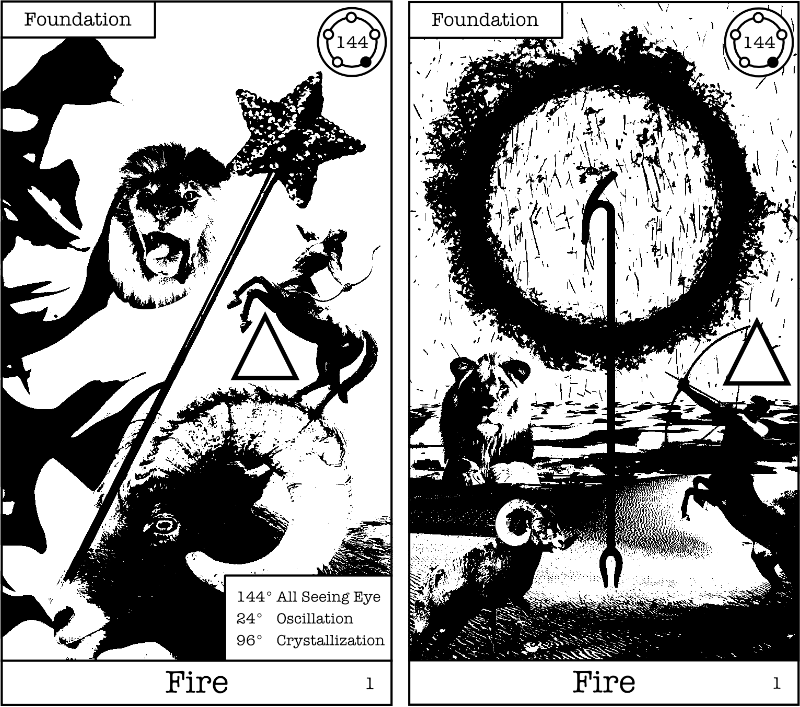 What should have been just a few minor updates has, of course, turned into a massive overhaul (surprising no one). The volume of changes I wanted to make seemed to grow as more changes were made. The funny thing was: I went into the second edition with only a small list of changes for the cards. I wanted to spend the majority of my time on the book! The Golden Oracle has its own ideas about what it should be though, and it basically just takes me along for the ride. I'm really happy with how things have turned out though, even if it took three times longer than expected.

Card updates basically fell into one of three categories: complete redo, refinement, and tweaks. I give an example of each below.

The hero image above is a before and after of the Fire (Foundation) card. First edition on the left, second on the right. This card was number one on my list of things that needed fixing going into the second edition, however, I wasn't expecting it to be a complete redo. My best description for the first edition card is: grade school glue stick disaster. Turns out there was some internal work I needed to do before the Fire card could come through clearly. The Fire card wasn't the only complete redo either. The other one was something of a surprise and probably deserves its own post, which I may do after the second edition book is complete.

Also probably worth pointing out: the relationship box in the lower right of each card has been removed to make more room for the art and reduce complexity. The relationships between nearby cards in other rings will be further elaborated in the book instead.

About half of the card updates ended up in the "refinement" category. These cards all had some significant changes but generally kept the same core. For example, in the Water (Foundation) card the zodiacal creatures were moved to better adhere to the implied ground plane, which turned out to be a fairly common theme in the second edition (grounding floating elements). The chalice was separated from the background to show more detail (another common theme for second edition) and shrunk a bit to also reinforce the ground plane. Pisces was barely visible in the first edition, and was missing a fish. The scorpion art was updated to fix the perspective and draw more attention to the stinger. The rain was shifted from a blowing rain, to a calm shower. 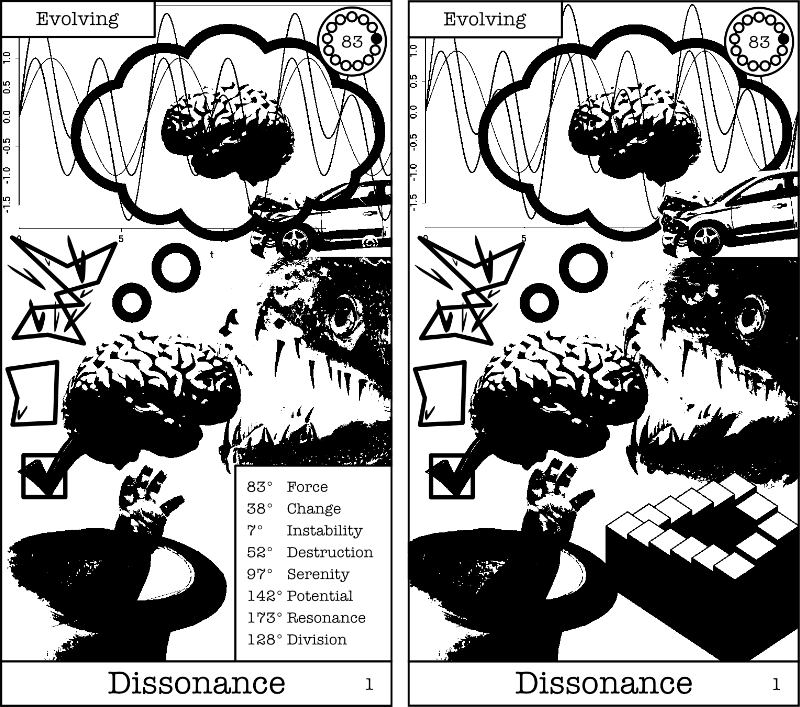 Have you ever played one of those "Spot the differences" games? See if you can spot the five differences in the Dissonance (Evolving) card.

Now that card art is complete, I've started work on the book. The book is going to take some time, but I'm excited about it. Not only are all of the cards getting a much deeper examination, but the book will generally be far more practical. When I was working on the first edition I really didn't know how the deck would be used. It's not really like other oracle decks I've used, and it's definitely not Tarot. It is this different but amazing magical thing, with it's own personality and characteristics. I've learned how to better use The Golden Oracle as a tool and I'll be sharing as much of that as I can in the book.

Once the book is complete and inventory stocked The Golden Oracle - Second Edition will be available for purchase on golden-oracle.com. I can't wait!