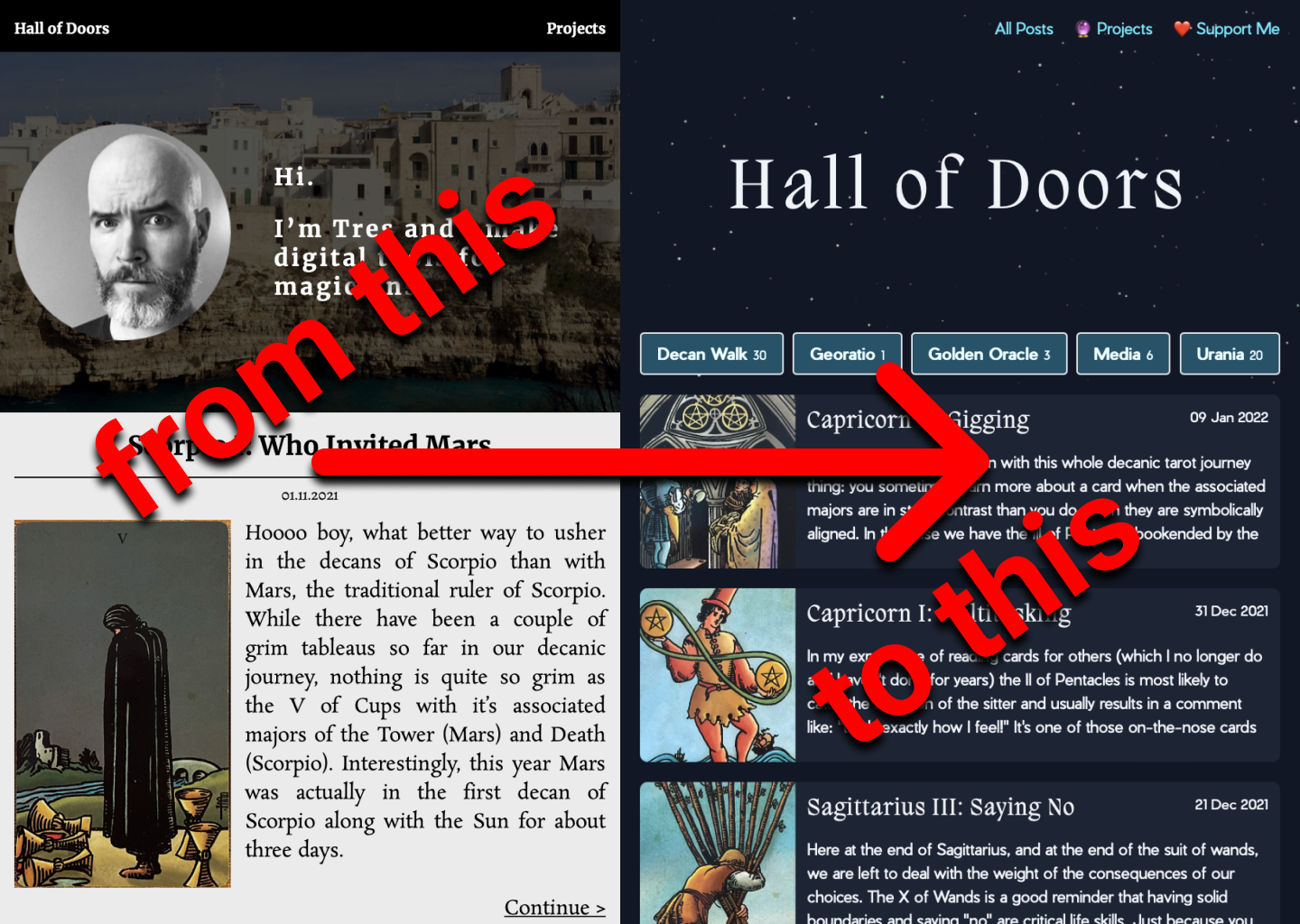 What better way to usher in a fresh new year than a fresh new website! I've talked before about the importance of one's investment into one's personal online presence, but let me just say up front that the new HoD is sparking quite a lot of joy for me right now. I've also got some great classes and new projects coming this year, so read on for all the details!

Figma is an amazing tool that is taking the design world by storm and quickly becoming the one-design-tool-to-rule-them-all. However, I've been super dismayed by discussions in online forums that many of you wonderful magical people out there are using either gross software like Inkscape (because it's free) or paying a crap-ton of money every month for also gross software from Adobe. If you need to do any kind of design work as part of your practice, this class is for you. Drawing seals? Designing your own grimoire/book of shadows? Creating illustrations for planetary talismans? Creating a new cartomantic deck? Whatever it is I'm going to show you how Figma will make your life oh so much better. An announcement is coming soon for the free online class (limited availability) then sometime shortly after I'll post a video version of the class on my YouTube channel.

Geomancy is enjoying a meteoric rise in popularity (and rightfully so) which has led to more people finding Georatio and then reaching out to ask for help getting started. There's a ton of resources out there including fantastic books like Greer's The Art and Practice of Geomancy and all of Sam Block's amazing geomancy posts and content, but they kind of require a commitment to dive in. I think there are a lot of people on the geomancy threshold who are curious but need a bit more info before taking the plunge into the endless depths of this amazing system of divination. In this class I'll go over the basics of the geomantic figures, geomantic math, and casting a shield chart. Everything you need to get started and dive deeper. Be on the lookout for the announcement date.

Last of the classes (for now) is a self-study video with step-by-step instructions for casting an astrological chart by hand from ephemeris. Both the ephemeris and a blank chart will be provided for download along with detailed instructions in video format. Modern astrology software like Urania makes astrological charting a breeze, but there's a lot of value in casting a chart by hand. Also, it's fun! If you are on the fence about casting a chart by hand because you think it requires tricky math, it definitely does not. If you can add, subtract, divide, and multiply then you got this! It's easier than you think, wonderfully empowering, and open to all kinds of creativity.

There's a handful of bug fixes coming in a new Urania release plus (maybe) an exciting new feature plus (maybe) Flatpak and Snap builds for the various Linux stores!

I've talked quite a bit about the intersection of divination and technology in multiple forums (for example on the Arnemancy podcast here and here) and have spent a lot of time thinking about what might exist at the middle of that Venn diagram. Some of you may know that I had been toying with the idea of bringing Georatio to mobile as an app for iOS and Android. However, as I spent more time on that project I began to have the unshakeable feeling that I needed to push the boundary further—go deeper. What if we unshackle ourselves from the constraints of the many existing (and amazing) systems of divination and take a completely fresh look at the technology we have and what we could do with it? Through the strange alchemy of spirit contact, insights while showering, dreams, and lessons from the past, I'm very excited to announce a new software project I'm working on for 2022 currently under the codename Mosaic. I'll have more to share in the coming weeks, so to keep this from being the worlds longest update, I'll just leave it there for now. SO MYSTERIOUS!

The dates and times for all of the above classes will be announced via the Hall of Doors newsletter. If you haven't signed up yet and are interested in any of the above, you should sign up soon!

All classes and video content are free. Class availability will be first-come-first-served with limited availability, however, if you miss the class you can always catch the content later on YouTube.

In total it took nearly 8 weeks to design and implement the new Hall of Doors website. It wasn't like eight-hours-a-day of work, but it was some work every day. I continued writing content throughout the redesign process (for example, decan walk posts) which was only available on the new not-yet-public platform. This resulted in a nearly two month backlog of posts. All this to say: I didn't take this undertaking lightly. In many ways it feels like Hall of Doors is becoming the new https://treshenry.net. As I transition out of the technology corporate hellscape and further into my own work, this feels like a natural transition. I'm assuming, at some point, treshenry.net will simply redirect to Hall of Doors.

The previous version of HoD was built on Hugo. If you aren't aware Hugo is a popular static site platform that is known for its speed and flexibility, which is great if you are working on a site with 10k+ files. The problem with Hugo is that it is a pain in the ass to create and maintain themes. I found that over time I just didn't enjoy updating the HoD theme, which meant it never got updated. Moving off Hugo to something more fun was a key priority. Also, HoD was just starting to look wildly out of date. I mean, the original design was never great to begin with because I threw it together over a weekend, but it was starting to look particularly ragged. There were also bugs in the responsiveness of the design the I hated, but didn't want to fix because of Hugo. On top of that, I wanted to change the structure of the site to better support finding related content. This really became a problem when I started my decan walk back in March of 2021 and had no way of grouping all of those posts together.

So what is HoD built on now? Eleventy for site generation, Nunjucks for templating, Tailwind for styling, Netlify CMS for content management, and Netlify for hosting. The only thing that stayed the same through the redesign was the hosting. I gotta say: this is an incredible stack. I love it so much that I'm now using it for other projects and have even created an open-source boilerplate called Blade that makes it easy to prop up a new site with this stack. If you are interested in learning more about it, go check out the code and/or send me a mail. Also, I still take on the occasional client, so if you are looking for help getting a project off the ground with an online presence that doesn't suck, let's talk.

I'm more software engineer than designer. However, I know enough to get by because I have worked with (and learned from) incredible designers throughout my career. One thing that really bugged me about the old HoD is that it just didn't feel like me. There was nothing about it aesthetically that helped inform the content. Beyond the structural changes mentioned above I also wanted something that felt fun, colorful, and tech-y.

Lastly, just a notice that the Hall of Doors Discord server has been shut down. It never gathered momentum and ended up being a dead-end of information. In an effort to regain my own sanity and the surface area of social engagement, it was time for it to go. However, you can always find me on the Hermetic House of Life Discord server along with hundreds of other wonderful witches, magicians, and lovelies. And, of course, by subscribing to updates right here from Hall of Doors.