Pisces I: The Cost of Entry 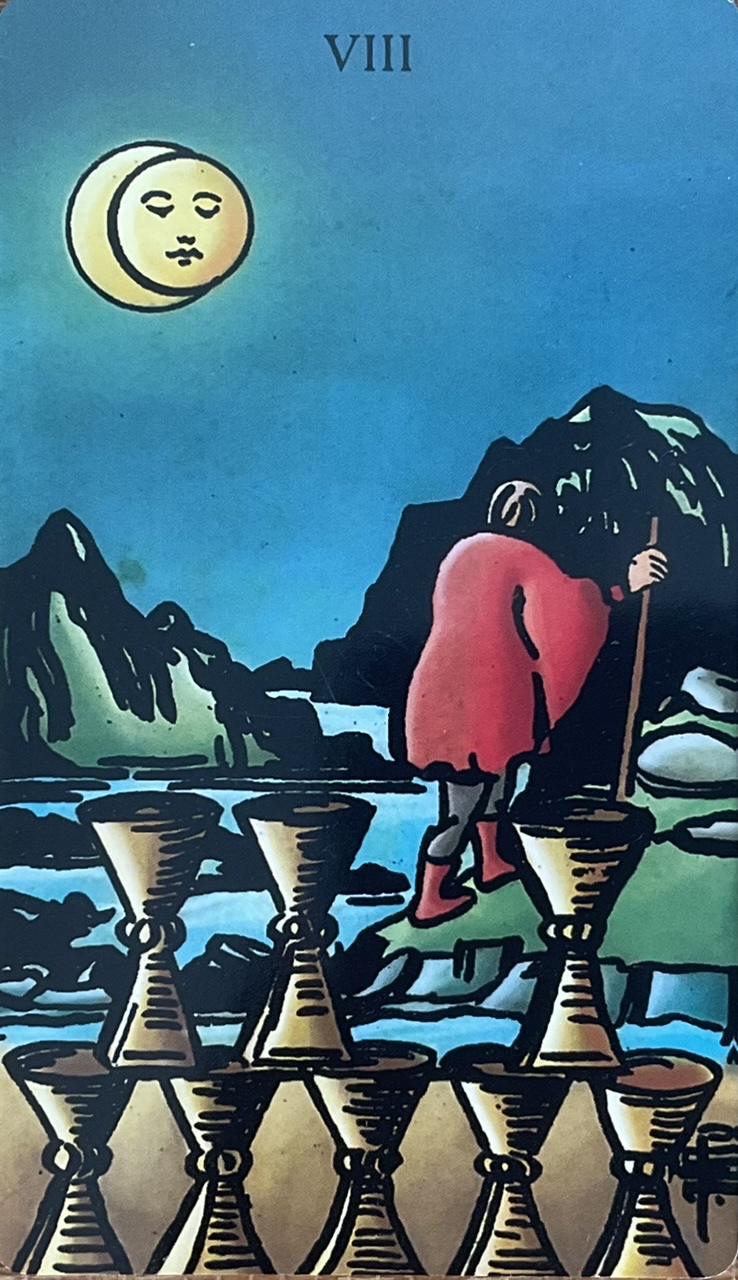 We have arrived at last in the final sign of the zodiacal year: Pisces. I'm publishing this post on my birthday, which happens to fall in the last degree of Pisces I, which is ruled by Saturn.

My natal chart has a perfect (within a single degree) grand trine formed by Saturn (in Gemini), Uranus (in Libra), and Jupiter (in Aquarius). When looking at this grand trine on a non-rotated chart (with Aries I on the left) it makes a nearly perfect downward arrow, the elemental symbol of water. Both my Sun and Mercury are in the first decan of Pisces. I know this decan. Like a deep kind of unspeakable knowing.

The mundane interpretation of the VIII of Cups usually revolves around letting go of something, or leaving something behind. That's all true but also only half the story. The mystery of the VIII, IX and X of cups runs much deeper. 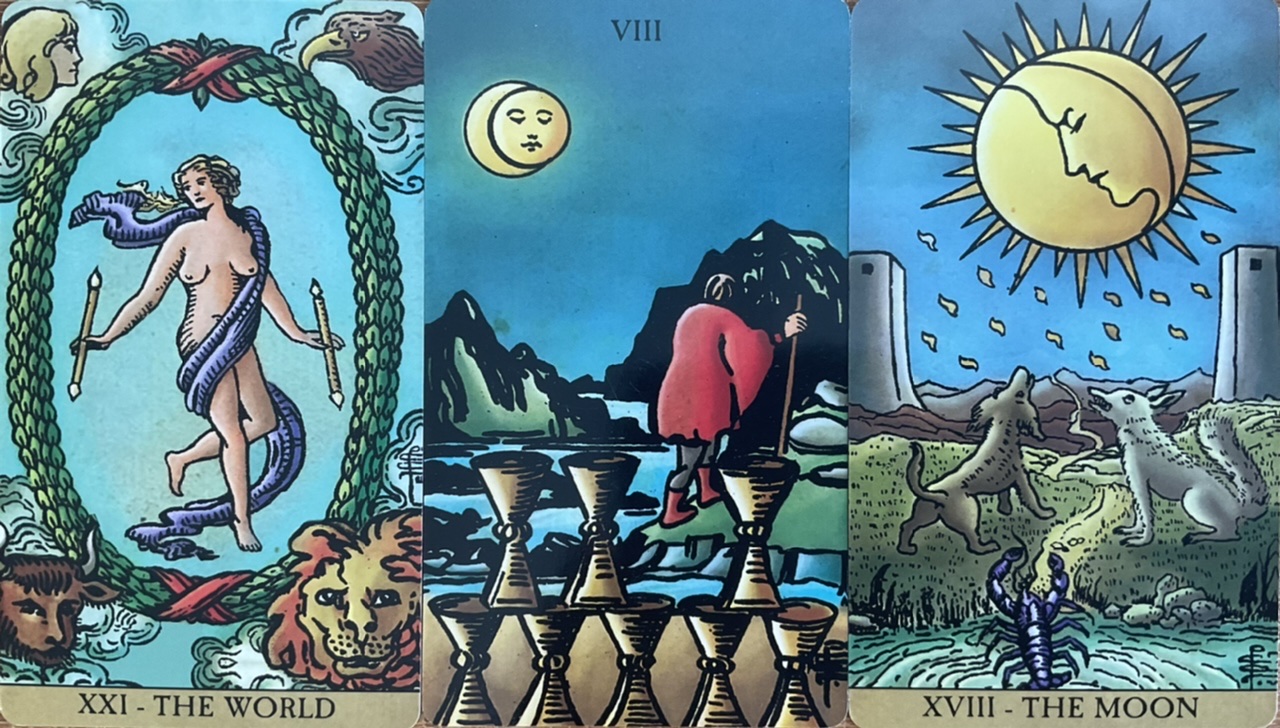 The cups left behind on the shore aren't smashed and broken (as some newer decks like to depict) but carefully laid out and stacked. That's because they are a sacrifice and an offering. They are the price you have to pay to safely walk the shore between land and water--the liminal path between the corporeal and the ethereal. 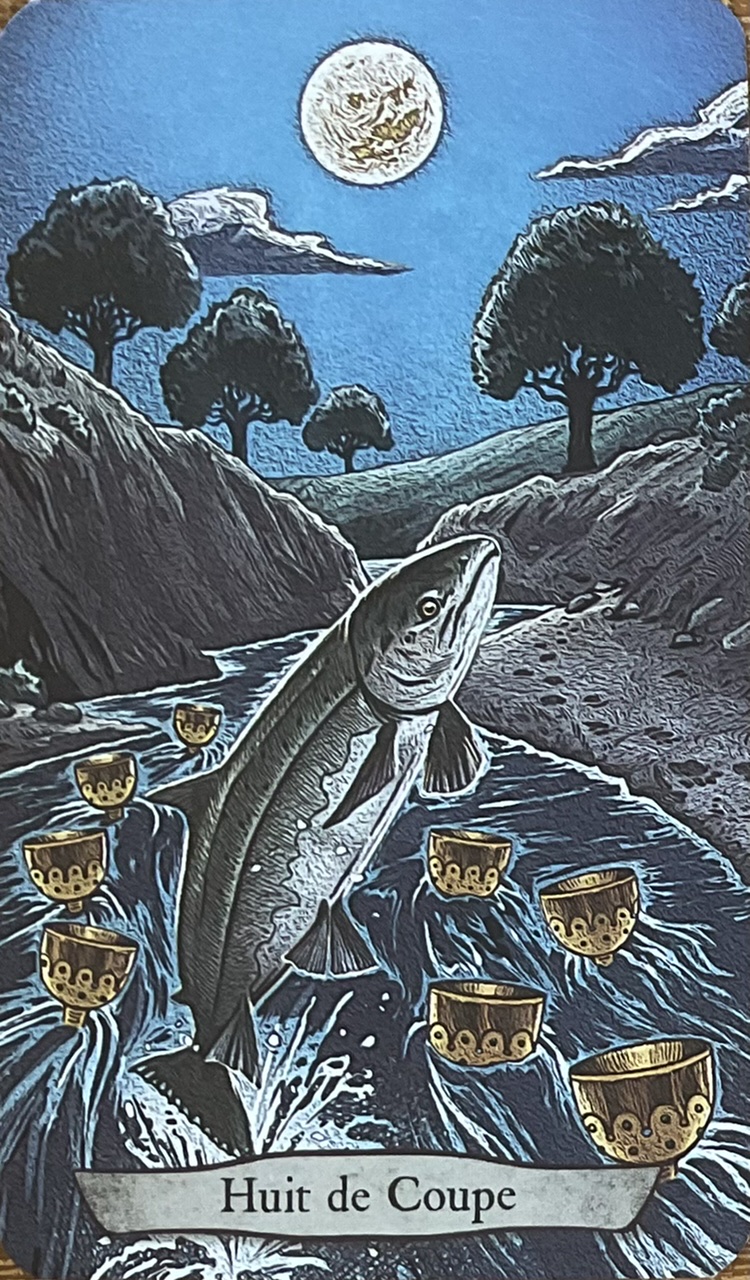 The AT somehow manages to knock it out of the park yet again with the VIII of Cups. Where did all this insight come from? Who knows, but what I can say is that the behavior of salmon swimming upstream to lay their eggs and then die is the best possible depiction of the VIII of Cups in the animal kingdom. It shows the joyous hard work and sacrifice necessary to close the circle. In the case of the salmon, to literally sacrifice it's own life to create the next generation. Salmon that spend their adult life in the ocean (not all do) go through a hormonal change shortly after becoming smolt which permanently changes their physiology to accommodate life in the salty ocean. However, when they return to their fresh water birthplace, their days are numbered as they can't survive long in fresh water anymore. That's a powerful metaphor for the mystery of Pisces I.