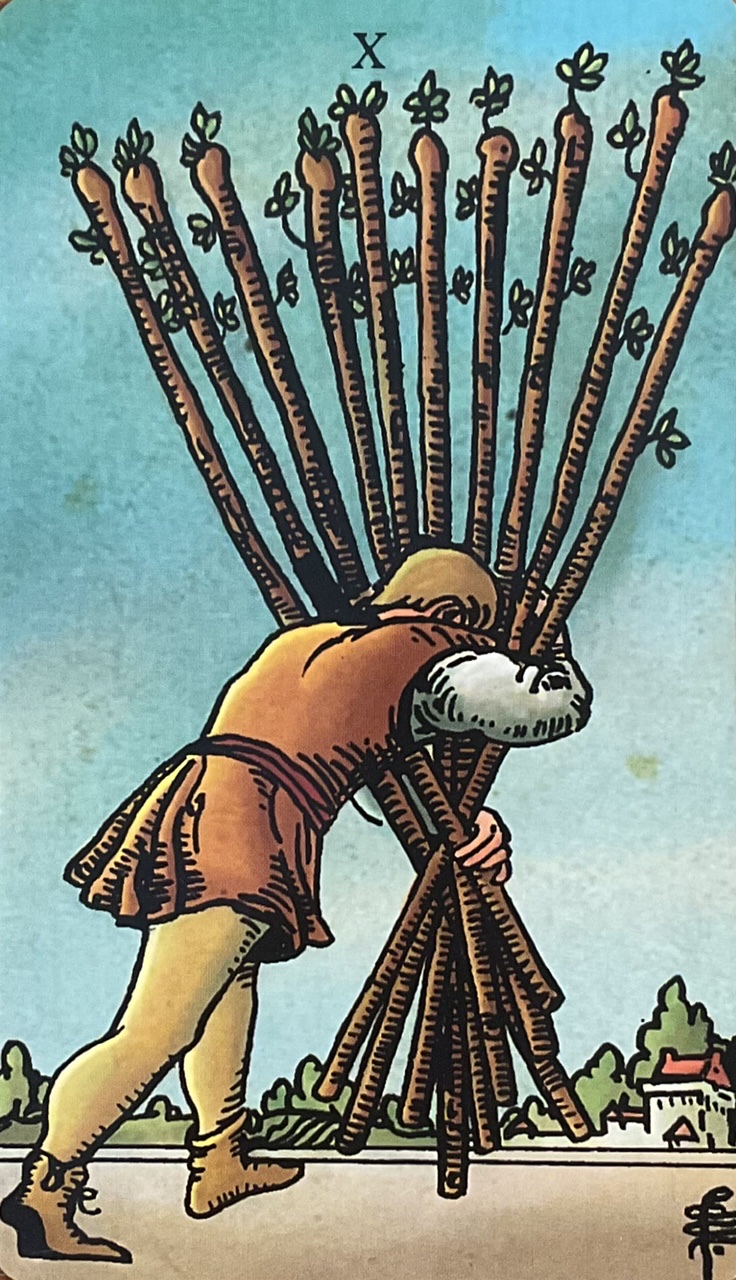 Here at the end of Sagittarius, and at the end of the suit of wands, we are left to deal with the weight of the consequences of our choices. The X of Wands is a good reminder that having solid boundaries and saying "no" are critical life skills. Just because you can do something, doesn't mean you should. Take on only what you really intend to carry all the way to the finish line.

I had a designer on one of my teams back when I was managing a large number of people at one of the tech giants who was notorious for never saying no. He was the constant recipient of work that other people didn't want to take on themselves. People in our organization knew that this designer wouldn't say no to new work. Consequently, he always had too much work on his plate and couldn't prioritizing the work that was actually important. All of that extraneous work, projects other people should have been doing themselves, would become a pile of burdens that made getting the important work done impossible.

Saying "no" is an important act of courage which allows you to focus on what is actually important. How many of your burdens are really yours? 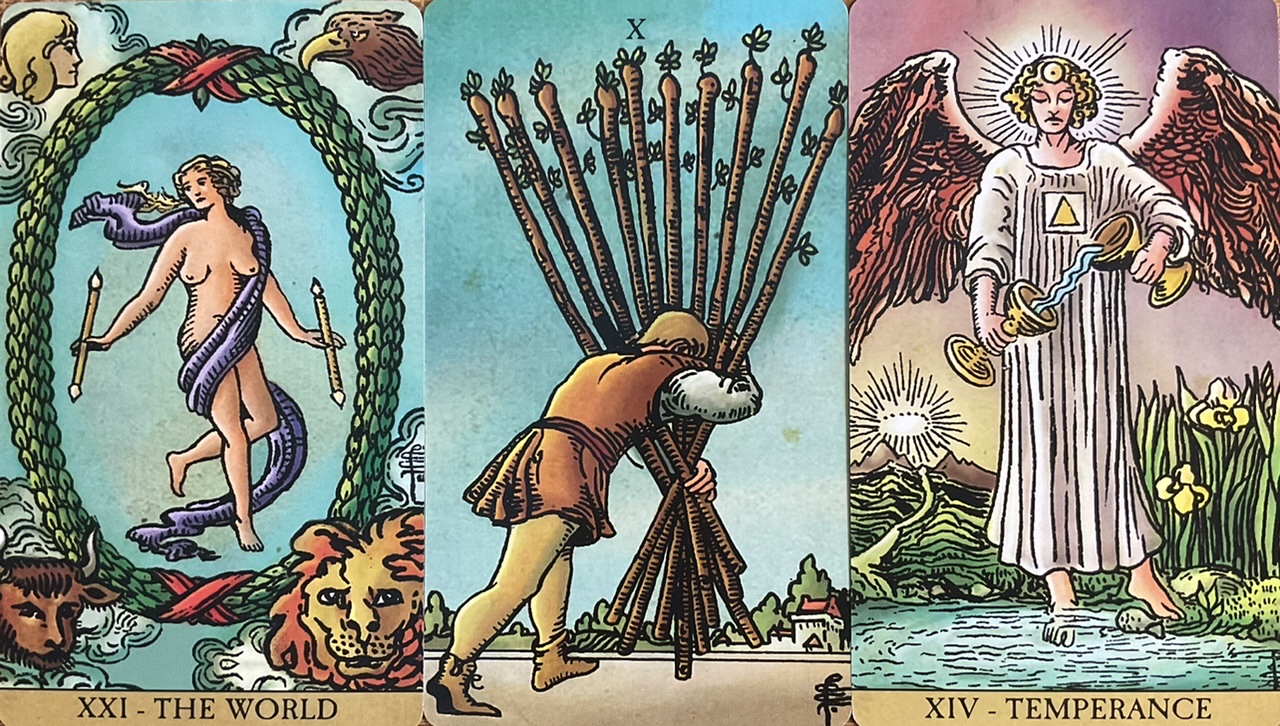 Unsurprisingly in the context of burdens growing over time, Saturn (the World) rules the third decan of Sag. 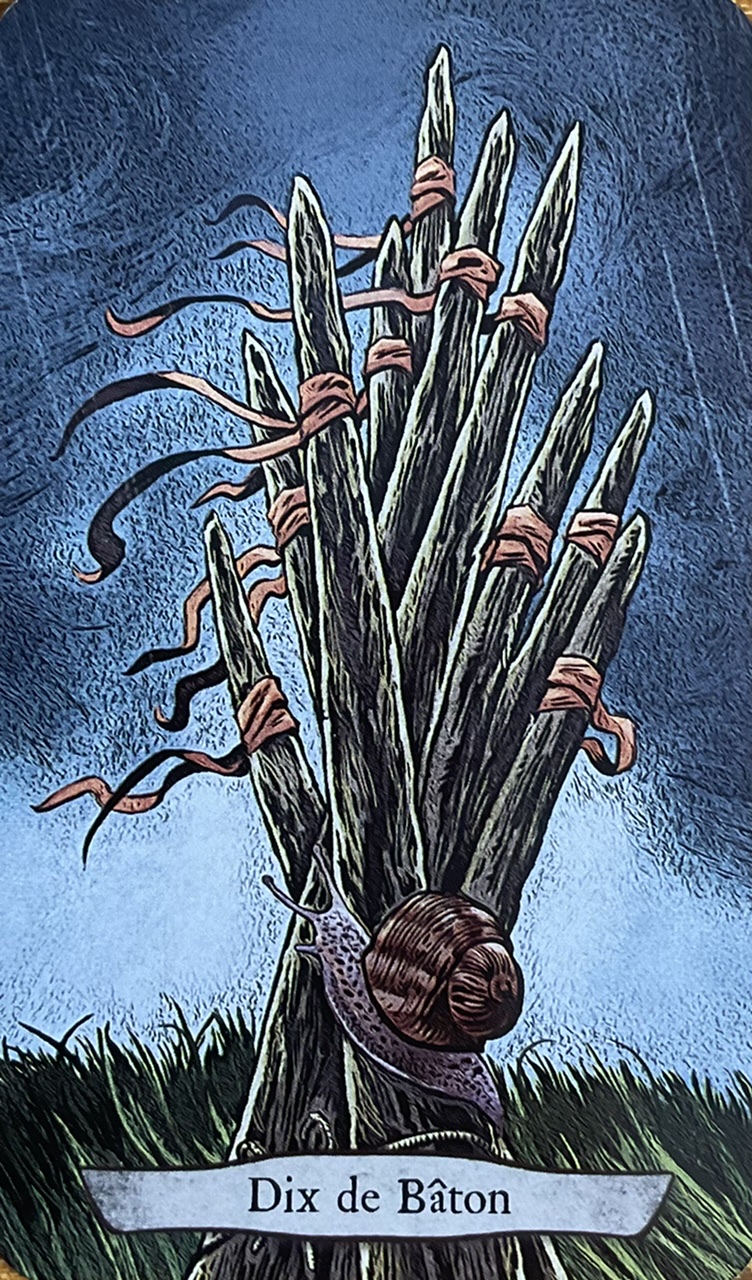 In reference to the third decan of Sagittarius, in 36 Secrets T. Susan Chang says:

The fact is, those sticks are coming down. And the question I've been asking my clients for over 20 years is this: Where are you going to drop them? In front, or behind you?

I think this idea of the inevitable collapse under the weight of the burden of our choices is captured beautifully in the AT X of Wands. The snail is tiny in comparison to this massive pile of sticks which, in this kind of severe weather, won't stand up for long. When it collapses where will the snail be? Crushed under the wood, or safely on top and able to continue their long journey? I like to think that the wood stakes in this image are fence posts left over from a fence long since forgotten. You see a lot of this kind of thing in northern Nevada. Someone decides to put up a fence around a massive piece of land then realizes the incredible burden of upkeep that fence represents, and ultimately leaves it abandoned where the weather eventually tears it down.

Also of note in this image is that the storm is both the reason the pile will collapse, and the reason the snail is able to make its arduous journey at all. Rain is required for the snail to travel any meaningful distance and the storm receding would be a burden in itself. Everything is perspective.